Why The World Will Not Agree to Pricing Carbon (Part I)

“If Europe chooses a solo effort through a one-sided climate protection target of 40% less emissions, it would mean billions in losses for us that our global competitors would not otherwise have gained. The damage done to competitiveness among energy-intensive companies in the EU would be considerable.”

This two-part series considers the probability of success of carbon pricing and an alternative approach. Part 1, ‘Why carbon pricing will not succeed’, is an edited extract from my submission to the Australian Senate inquiry into repeal of the carbon tax legislation (Submission No 2; Mr Peter Lang).  Part 1 explains why carbon pricing cannot succeed unless it is global, and global carbon pricing is unlikely to be achieved, let alone sustained for the time until the job is done (centuries).

Part 2 tomorrow, ‘Why the world will not agree to pricing carbon’, evaluates the output from the most widely cited and accepted climate economics model and shows that at realistically likely participation rates, carbon pricing would be economically damaging for all this century. Costs would exceed benefits for all this century and probably forever. Negotiators recognize these facts so they will not sign up. An alternative approach is suggested that may be worth more consideration than it has received to date.

Proponents of carbon-pricing acknowledge that to succeed it must be global. Proponents of national or regional level carbon pricing argue that these schemes will, eventually, integrate into a global carbon pricing system. Yet it is highly unlikely a global carbon pricing system will be implemented because negotiators recognize the high cost for negligible benefit for participants until there is a global system with near full participation (all human-caused GHG emissions from all countries).  Therefore, national or regional schemes would have high cost for little benefit and hence not be politically sustainable.

Proponents of carbon pricing argue it is the least cost way to reduce greenhouse gas (GHG) emissions. Their argument is based on assumptions that are appropriate for a theoretical exercise but unlikely to be achieved in practice, let alone sustained for the time the policies would need to operate (i.e. centuries).  Significantly, little research has been done to investigate the probability that carbon pricing can be implemented and deliver the projected benefits in the real world.

Uncertainty about the problem (man-made climate change) is a given; but uncertainty about the chosen solution is inexcusable. This is to say, we should be confident that our solutions are going to be effective, and the more expensive the solution the more confident we should be. In short, big responses require high levels of confidence that they will work.  There seems to be a lack of credible evidence to demonstrate carbon pricing passes this test.

Carbon Pricing Cannot Succeed Unless It Is Global

Analyses by Professor William Nordhaus, a long-time advocate of carbon pricing and a world authority on estimating the costs and benefits of climate change, greenhouse gas mitigation policies and carbon prices, shows why carbon pricing must be global or the cost would be prohibitively for participants. Nordhaus (2008), p. 198, says:

Complete participation is important because the cost function for abatement appears to be highly convex. We preliminarily estimate that a participation rate of 50 percent instead of 100 percent will impose a cost penalty on abatement of 250 percent. 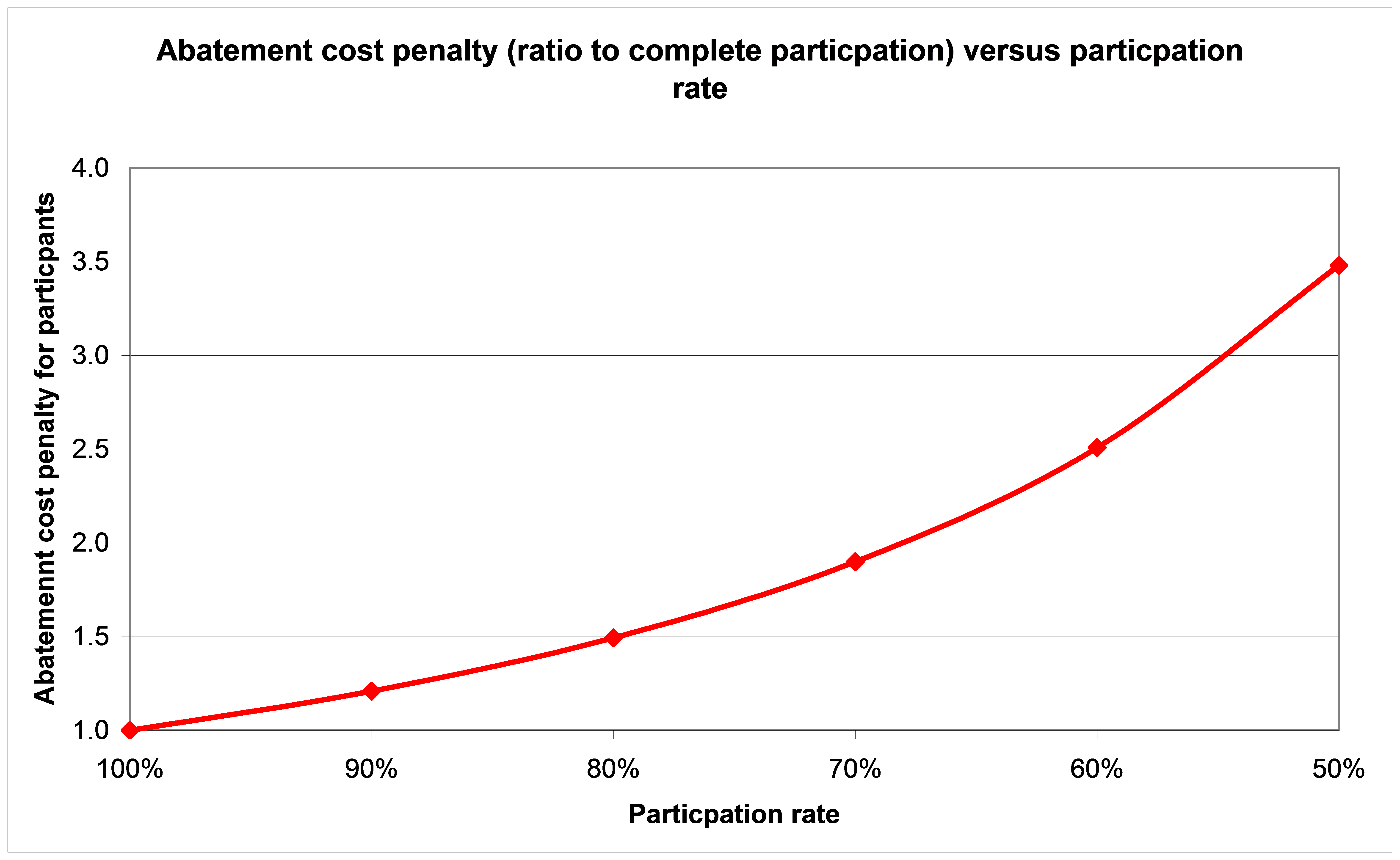 In reality, the cost penalty for the participants would be higher than Nordhaus has estimated because the compliance cost of carbon monitoring, reporting, policing and disputation has not been included. The compliance cost per unit of GHG emissions would escalate as smaller and smaller emissions sources are included.

Given the above, we should consider what level of participation could realistically be achieved and what the compliance cost would be. Furthermore, given the cost penalty for the participants, we need a persuasive case that there is a high probability of a global agreement to price carbon being implemented and maintained for as long as necessary to achieve the projected benefits (i.e. reduced climate damages).

Nordhaus explains that the assumptions used for the cost-benefit analyses, which are used to justify global carbon pricing, are theoretical; arguably, they are unrealistic for the real world. He says, p. 68:

“We should provide a word of caution about the optimal case. It is not presented in the belief that an environmental czar will suddenly appear to promulgate infallible canons of policy that will be religiously followed by all. Rather, the optimal policy is a benchmark to determine how efficient or inefficient alternative approaches may be. This is the best possible policy path for emissions reductions, given the economic, technological, and geophysical constraints that we have estimated.”

If these conditions are not met, the projected benefits of carbon pricing would not be achieved.

Professor Richard Tol, a long time advocate for carbon pricing and a leading world authority on estimating the damages of global warming, estimates the probability of achieving a global agreement at a UN climate conference  He said in November 2012:

The 18th UN Conference on climate change negotiations has just started in Doha. This column suggests that the probability of success is a mere 2.3%. Recently, over $100 million per year was spent on fruitless negotiations. Having flogged, ever harder for 18 years, the dead horse of legally binding emission targets, the UN should close that chapter and try something new.

The article (and his Figure 1 reproduced below) explains why a meaningful global agreement is unlikely to be achieved. For example he says: 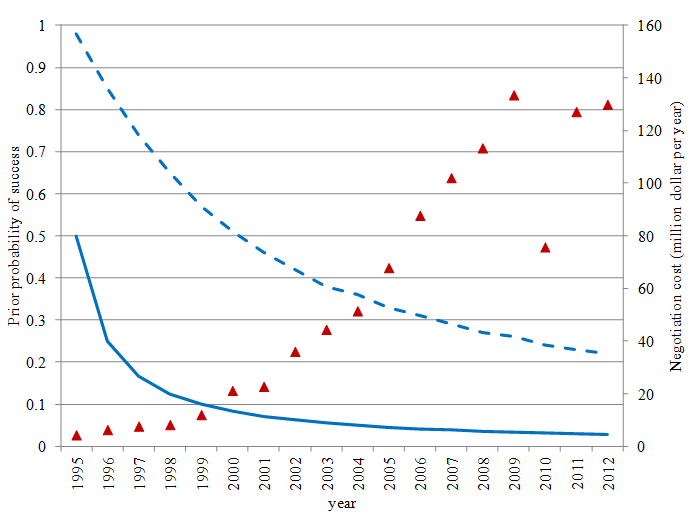 The solid blue line shows the estimated probability of success of each round of the UN climate conferences since 1995.

An analysis like this might be used to estimate the probability of reaching agreement on a carbon pricing scheme that would deliver the projected benefits of reduced climate damages and survive until the job is done.

Richard Tol’s article reveals it was predicted back in 1991 the world would not agree to legally binding international agreements, such as carbon pricing or targets and timetables for emissions reductions with penalties for breaches of commitments.